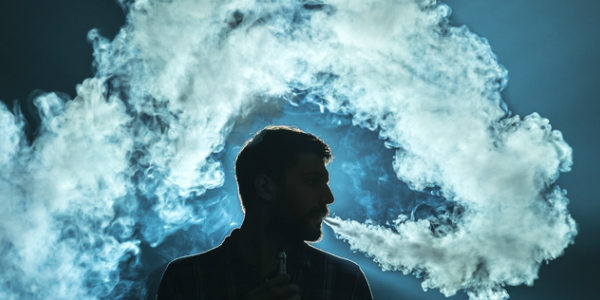 This is a question we get asked every day. Seriously.

It’s almost always comes accompanied by its close cousins such as:

Does it contain tobacco?

Is it safer than smoking?

You know the drill.

But what does vape mean really?

Vaping can be defined as the act of inhaling water vapor through a personal vaporizer (the vaper’s tobacco-free version of the traditional cigarette).

Vaping is an alternative to smoking. It’s like smoking minus several of the adverse effects of the latter: no bad smell and bad breath, no cigarette burns, no more dirty ashtrays, less likelihood of getting cancer and other smoking-affiliated illnesses – you get the drift.

In short, vaping is the name given to the use of a vaporizer. The process involves applying heat to a liquid which generates vapor. The user, called a vaper (smoker in traditional cigarette circles) gets their nicotine hit through inhaling the almost odorless vapor (smoking equivalent of ‘smoke’).

A Quick History Of Vaping

Contrary to what many of us believe, vaping ‘came into being’ as far back as over five decades ago (1960s to be exact). Back then it was not what it is today – but of course. Vaporizers at the time weren’t easy to carry around. They were more of a static, tabletop kind.

The big brain behind their invention was Hon Lik, a Chinese pharmacist who took inspiration from the death of his father.

Cause? Cancer from smoking.

He called this device a Ruyan, which loosely translated means ‘like smoke’.

The Ruyan proved to be a hit, and it slowly vaporized its way into the U.S. in the mid-2000s, and here, vaping was born.

Anatomy of a Vaporizer

The vaporizer is made up of various components.

These ingredients get vaporized in the battery-powered atomizer which simulates the experience of smoking.

If you are completely new to the vape world and wondering what vaping is like, here’s another way of putting it.

The e-liquid comes packed in different nicotine strengths categorized in milligrams: ultra-light (6mg), medium (12mg), regular (18mg), and strong (24mg). There is even 0 milligrams which contains no nicotine for those who just want to vape minus the nicotine hit.

Stronger nicotine will result in a stronger throat sensation commonly known in the vaping world as a “throat hit” or “kick”. It depends on the individual user and how much nicotine they want.

Pro Tip: It’s advisable to start low, then work your way up to a zone that will take care of your nicotine demands.

Where Can You Vape?

Now that you know what is vaping, where can or can’t you vape?

You can vape legally almost anywhere (it’s not a drug), but vapers are being increasingly legislated across the world. Like smoking cigarettes, you might find there are restrictions on where you can use your vaporizer or mod. Just be courteous of people around you and respect the rules and you’ll be fine.

The Benefits of Vaping: Truth of Fiction?

There is a never-ending debate on whether vaping is safe or not. Well, not even the food you eat is 100% healthy, right?

However, we can say – based on various studies – that vaping does involve nicotine but there is no tobacco. It has its own form of smoke (vapor) but there are no known adverse effects on the heart and arteries. It emits vapor but second-hand exposure to the vapor does not pose a public health risk in the same way as tobacco.

It is akin to smoking but it is odorless. It gives us a nicotine fix just like smoking but without the likelihood of health concerns that lead to diseases like cancer.

What’s more, there are no more butts, no social stigmas, no fire or flames, no ash, and you get to save more money since e-cigs and vaporizers are cost-effective in the long run (as compared to cigarettes).

If you’re trying to give up smoking but struggling.. we understand! We were all there once and vaping really is a much better, healthier experience. Yes it is still new and slightly misunderstood but if you’re a newbie, don’t be swayed by all the myths surrounding the vaping industry. Do your own research and you’ll see what vaping is really all about.

We hope this article helped you sort through some of the chaos and make a better decision about vaping.